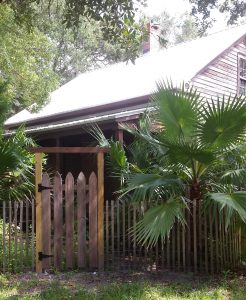 This elegant and beautifully restored house is a modified four-square that appears to date from around the turn of the last century. In 1877, Sylvia Pennington (sometimes written as "Pendleton") bought this property for $75. Mrs. Pennington lived at this address, but probably in a house that pre-dated this one. She was of mixed race, born in 1816, and was most likely a slave before the Civil War. In 1880, she was a widowed woman who, like many other widows on the Hill, took in boarders - even into her nineties - to help with her finances.  In 1883, she sold the house for $1 to the Mt. Zion Baptist Church which, twelve years later, sold it for $60 to a James Monroe who sold it the very same day to a Mr. McClark for $125. Two smaller houses once flanked the main house, one on either side; a fire destroyed the one on the east side and the other disappeared sometime after 1978.