The Shotguns of Apalachicola

Apalachicola, one of the last working waterfront communities in Florida, is known for its natural beauty, its famous oysters and its early history as a major port at the junction of the Apalachicola River and the Gulf of Mexico. The port's busy commerce, primarily in cotton and lumber, brought wealth and a diverse population to the burgeoning city, which led to the rich cultural heritage that is evident today.

The shotguns of Apalachicola were built primarily for mill workers and were early examples of affordable housing.  In the early 1900s Apalachicola's northside neighborhood known as The Hill was the center of African American life.  Mill workers, oystermen and workers in the shrimp canneries lived in the shotgun style housing built within walking distance of their work.  These houses are an important part of the industrial and architectural history of Apalachicola.

The shotgun design was efficient and practical and, upon hindsight, achieved a simple elegance that, like a lot of folk art, was not even consciously considered as it was built.  The distinguishing characteristic of these long, narrow houses is that the front door is opposite the back door, with the entries between the three standard interior rooms -- living, kitchen and bed -- aligning so that cooling breezes could flow through, or alternatively, such that a shotgun blast from the front door might, and likely did upon occasion, go straight through the house without hitting any walls.  Traditional folklore also tells us that the name and design of these houses may have derived from the African "shogun" which came to New Orleans in the 19th century via the West Indies.  Oversized windows and gingerbread trim often graced these shotguns' facades. 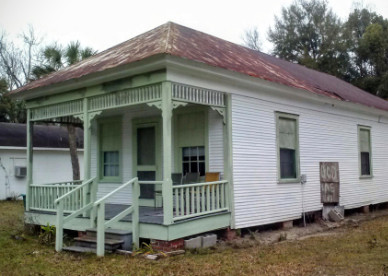 In the mid to late 20th century, shotguns with their rich history were either demolished or left to decay because at the time they were considered architecturally insignificant.  Today, however, these tiny gems are once again valued for their simple charm and affordability, and  efforts are underway in cities such as New Orleans, Louisville, Houston and Apalachicola to restore and revive them.   Noted Apalachicola-born architect and architectural historian, Willoughby Marshall, and his wife Marie, President of the Historic Apalachicola Foundation, are valued supporters of the SOS endeavor: "Shotgun houses," they write, "are an efficient housing model which has personality in a small footprint, and their design encourages the social life of residents. SOS champions the idea that shotguns can be updated and promoted as a model that offers an incentive for Apalachicola to build affordable, attractive housing."