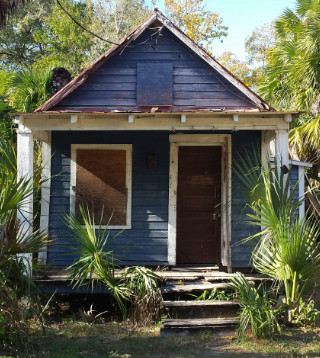 Save Our Shotguns Apalachicola is a non-profit 501(c)(3) working to preserve the historic structures of Apalachicola for the purpose of affordable housing.

We are an all-volunteer organization dedicated to our mission: to preserve historic structures, to create housing for low and moderate income people, and to create training and jobs for local residents.

Save Our  Shotguns Apalachicola was founded in 2016 by a group of residents living in Apalachicola's Hill neighborhood, who sought to rescue the historic structures, including classic shotguns, that were in various states of deterioration, many hidden under a jungle of overgrowth.  Unlike the historic mansions that have become the pride of the city, no attention was being paid to the historic shotguns and other decaying buildings.

They also saw the need for affordable housing in the community-- residents unable to find housing in the town in which they and their children were raised;, teachers, police and firefighters unable to locate housing they could afford on their salaries.  Additionally,  jobs in the small city of 2500 were growing scarce;  residents were no longer able to depend on the struggling fishing and shellfish industries, a dying way of life for this region that traditionally has prospered from its propitious location where the fresh water flowing from the Apalachicola River meets the saltwater of the Gulf of Mexico.

They formed a nonprofit dedicated to preserving these historic structures to create housing for low and moderate income people and to create training and jobs for local residents.

Save Our Shotguns conducted a survey of the two-mile square area that rises up on the north side of town and identified 96 structures that could be candidates for restoration—some individually owned, others bank or estate-owned, many abandoned.  Rather than restore these houses as static museum-like replicas, Save Our Shotguns is working to create affordable housing through historic preservation. The organization is seeking projects and funding toward these goals.