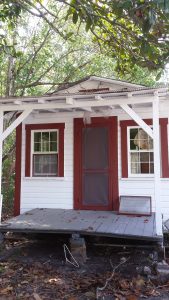 David Bell was an African American railroad worker. On weekends, he cut hair, and, in the 1940s, he built this little building to use as his barbershop. David and his wife, Katie, lived in the house next door - which David also built - with their two boys. Never one to rest, David also grew vegetables and raised hogs on a piece of land just outside of town. Katie, a woman well-loved by the community, was called "Aunt Bell" by everyone. She worked as a crab-picker and she directed the choir at Friendship Baptist Church on 9th Street. In later years, Katie worked as a domestic for a local doctor.  When David and Katie Bell were living here, the Hill was a thriving and self-sufficient community. Next door to the barbershop, heading towards town, were three shotgun houses and, on the corner, Oakland Rhodes' pool room, snack bar, and barbershop. Behind the Bell's house, on 8th Street, were the Club Ramona (which later became an oyster shucking house), a dry cleaning establishment and another barbershop. Across 7th Street from the Bell's was the Royal Café.