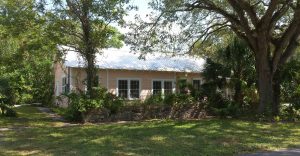 Chester S. Rhodes, born in 1905 to a Greek shrimper and his mixed race fishing partner, was adopted as a baby by Evan and Mary Pridgeon Rhodes. Growing up, Chester spent all his time on the waterfront and learned how to speak fluent Greek and Italian from the many immigrant seafood workers and fishermen. At the time of his marriage to Lottie Eleanora Lane, Chester was a shrimp boat captain. In 1932, with two boys, Chester and Lottie moved into this house. At that time, the house had only two rooms and an outhouse in the yard, but with the birth of a third son, Chester began adding on to the house, doing all the work himself.  When Lottie convinced Chester to give up fishing, he got involved in a lot of different kinds of work: house painting, cement work, demolition work, and the coal business. On the corner across 8th Street, Chester owned several lots which became the repository for the many items he picked up doing demolition jobs. People from all over town shopped for everything from door hinges to antique furniture at Chester's place. Chester also bought up a lot of shotgun houses as rental properties. In the 1940s on the lot behind his house, he built a funeral home which was operated by his son, Chester J. Rhodes, a licensed mortician. The younger Chester also ran the laundromat, barbershop and small store on the corner diagonally across from the family's house. Chester worked tirelessly six days a week, and his three boys all graduated from college - as did his five grandchildren.  Chester died in 1988 and is buried next to Lottie in Magnolia Cemetery.