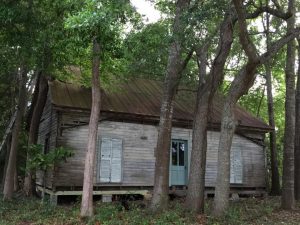 This house is a fine example of a traditional "four-square." It has two rooms, one behind the other,  on both sides of the wide, high-ceilinged central hallway. Based on other, similar houses in Apalachicola, it is probable that this house was built around 1880. The last person who lived in this house was Matt Raiford, an African American sawmill laborer, whose wife owned the house and left it to her son upon her death in the 1929. Raiford bought it from his stepson and lived in it until his death in 1960. Mr. Raiford rented out the two rooms on the south side - each of which has a fireplace - to various tenants, including Leon and Anna Osborne from Mobile, AL. The last of the Osborne's five children, Gracie Osborne O'Neal, was born in the front room on December 1, 1937. When Mr. Raiford  - known to his friends as "Buddy" - got older, he devoted himself to gardening and raising chickens. No one has lived in the house for the last fifty years and its interior boasts well-preserved and unpainted heart pine and cypress.