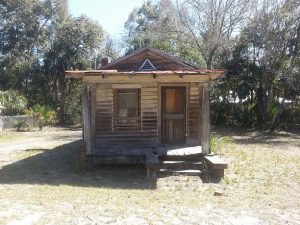 Pictured is a traditional shotgun. It sits facing Avenue L on the lot at  215 9th Street. This building has the typical layout of three adjoining rooms with no hallway.  The front door, rear door and the interior doors are in alignment so that a “shotgun” could be shot through the front door and exit the rear door without hitting any walls. This building, like so many others on the Hill, may have been moved to this location from elsewhere sometime after 1922 (it does not appear on the 1922 Sanborn Fire Insurance Map).  The nail patterns in some of the boards indicate that the lumber was previously used, perhaps more then once. The house is being renovated by its new owner.

The small photograph shows a nail removed from the house during remodeling. There is evidence that it may have come from a 19th century British sailing vessel. Click here to access a PDF document that supports this theory. 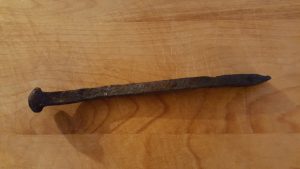